It’s the season when we worry about skin cancer. (Not to mention the anti-aging effects of the sun.) But what if the best preventative 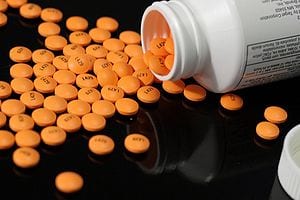 is right there in your medicine cabinet?New research reported in the journal Cancer found that people taking aspirin regularly were much more likely not to get squamous cell carcinoma or malignant melanoma, two of the most common — and deadliest — skin cancers.

The researchers, based in both Denmark and the U.S., discovered that people who took common NSAID painkillers, including both aspirin and ibuprofen, over long periods of time were less likely to develop skin cancer. The risk reduction wasn’t enormous, but it was quite significant:  painkiller users were 15% and 13% less likely to have gotten squamous cell carcinoma or malignant melanoma, respectively. The protection was strongest in those who took aspirin or ibuprofen for at least seven years or used them at least twice a week.

Aspirin Prevents Other Types of Cancer, Too

But skin cancer is only the beginning of aspirin’s anti-cancer benefits. Three other recent studies, published in the Lancet, found that people who take a daily aspirin have as much as a 46% lower risk of colon, lung and prostate cancer compared with people who rarely or never take aspirin. In addition to preventing new cancers, aspirin was also found to reduce the risk of cancer recurring.

Interestingly, the studies were reassessments of data from several previous long-term studies on aspirin and heart disease. The participants took low-dose aspirin (75 mg to 300 mg) over a long period of time to assess reductions in stroke and heart attack incidence. In the current studies, the researchers examined how many of them then went on to develop cancer.

The studies all found a large reduction in cancer risk. In the first, patients taking aspirin lowered their risk of cancer by 25% after five years and of dying by 15%. After five years, the risk of death dropped to 37% lower than in those taking a placebo. The second study included five separate trials that followed patients for an average of 6.5 years and found that aspirin users lowered their risk of developing metastatic cancer by 36% and their risk of colon, lung, or prostate cancer by 46%. A third study looked at long-term risk of several cancers and concluded that regular use of aspirin not only reduced the risk, but prevented tumors from metastasizing, or spreading.

Beyond Cancer: Aspirin and Heart Disease

Aspirin also prevents heart attack and stroke, which is where all these studies began. But the studies on aspirin and heart disease have been a little confusing. In people with a history of heart disease, the benefit is clear.

But as a preventative measure for those who are heart disease-free, aspirin’s not looking so good. A recent review of nine clinical trials, published in the Archives of Internal Medicine, showed that while aspirin reduces the risk of heart attack in middle-aged adults without known heart disease, aspirin didn’t seem to confer protection against stroke or fatal heart attack. Aspirin showed limited benefits against non-fatal heart attack, but those benefits were offset by relatively rare but dangerous side effects.