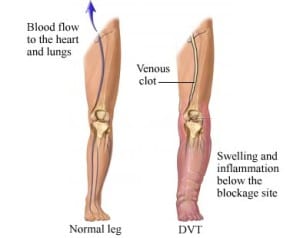 or vein, but new US guidance has looked at a range of factors that could potentially raise the risk.

Those of you thinking of booking your summer holiday might be interested to know that flying in cramped budget seats, while often annoying, presented no greater risk than flying in business class. And while pricey booze available during a flight can prove wallet-damaging, the guidelines say there was no firm evidence that drinking it could bring on DVT. However, sitting by a window during a long-haul flight was associated with a greater risk because of the limited opportunities for walking around. People’s age, previous DVT and recent operations were among the other factors found to raise DVT risk.

The evidence-based guidelines were produced by the American College of Chest Physicians to address the risk of both DVT after long-haul flights and the potentially fatal lung clots (pulmonary embolisms) that can follow. The guidelines also include recommendations about the best ways for travellers to reduce their risk of DVT.

The guidelines seem to debunk the long-held assumption that a lack of legroom causes DVT. This much-debated phenomenon is often referred to as “economy-class syndrome”.

What is “economy-class syndrome”?

It is long established that inactivity is associated with DVT, and so some people believe that the lack of legroom when flying in economy class can increase the risk of developing a blood clot. This has led to the theoretical phenomenon being dubbed “economy-class syndrome”.

Some have also suggested that dehydration is more common during economy travel and may increase the risk of DVT. However, the existence of this so-called “economy-class syndrome” is controversial and has never been proven.

Deep vein thrombosis or DVT is when blood clots form in a deep vein. A clot that develops in a vein is also known as ‘venous thrombosis’. DVT most commonly affects the leg veins or deep veins in the pelvis. It can cause pain and swelling in the leg but in some cases there may be no symptoms.