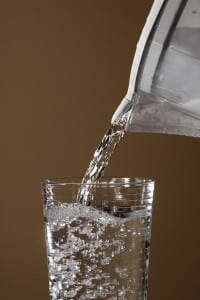 NEW YORK (Reuters Health) – Older women whose diet include too little calcium or water — or too much salt — have an increased risk of developing kidney stones, a study confirms.

Researchers found that among more than 78,000 U.S. women in their 50s and 70s, the risk of developing first-time kidney stones declined as calcium or fluid intake climbed. On the other hand, the odds went up with a higher sodium intake.

Kidney stones develop when the urine contains more crystal-forming substances — like calcium, uric acid and a compound called oxalate — than can be diluted by the available fluid.

People prone to developing kidney stones have long been told to boost their fluid intake; that helps dilute the substances that can lead to stones. Cutting down on salt can help because too much sodium boosts calcium levels in the urine.

Since most kidney stones contain calcium, it was once thought that cutting down on calcium could help.

But studies in recent years have suggested that dairy foods may actually be protective — though calcium supplements may not be wise for “stone formers.”

These latest findings, reported in the Journal of Urology, confirm the conventional wisdom.

Doctors have been particularly concerned about the calcium question in older women, since they are at increased risk of thinning bones and fractures, said Dr. Mathew Sorensen, a urologist at the University of Washington School of Medicine in Seattle who led the study.

So it’s good to know that a higher calcium intake from food is linked to a lower risk of kidney stones in older women, Sorensen told Reuters Health.

“When people form stones,” he said, “many naturally think they should reduce their calcium intake.”

But it’s “good general advice” to stick with your usual dairy intake, according to Sorensen. And if you take calcium supplements, ask your doctor about whether you should stop.

The findings are based on 78,293 U.S. women who were followed for an average of eight years. During that time, 2.5 percent — one in 40 — were diagnosed with kidney stones for the first time.